Restaurants Can Now Publish Deals and Coupons Through OpenMenu

OpenMenu has a new standard, the OpenMenu Deals standard, and we’ve fully incorporated the deals/coupons into OpenMenu for restaurants.  What this means is restaurants can now fully manage their deals and coupons without the need for high-markup 3rd party companies being involved.  Your deals, your coupons, published across your online world.  From your mobile site to Facebook to your website, OpenMenu is fully supporting the new deals standard.

Restaurants can manage their deals at OpenMenu

With our powerful, and easy to use, Deal manager restaurants can manage their deals in real time.  Setup a deal, publish live and your deal appears on Facebook, mobile site and your website.  Nothing else needs to be done.  Want to promote your deal?  Use our powerful social integration and push your deal to Facebook (your personal page, your restaurant’s page, a group – you have the option) and/or Twitter.  Don’t want the deal to run anymore just turn it off or delete it all together.  Restaurants stay in control. 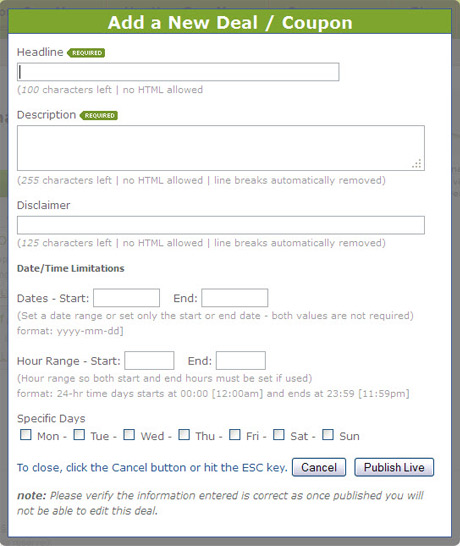 The power of our deal manager allows restaurants to define a daily deal, coupon, happy hour special and much more.  This new feature is all about control and giving that control back to restaurants.

Want more?  We give you the stats on how your deals are performing.  How many deals have been viewed for your restaurant and a 7 day trend.

This is just the start for the new OpenMenu Deals standard and implementing it across the OpenMenu Platform.  We are working with distribution partners to get the restaurant’s deals and coupons out across our large network.

The powerful mobile site given to all restaurants on the OpenMenu Platform is fully equipped to handle deals and coupons placing them in a place sure to entice viewers.  Publish a deal and it automatically appears on the restaurant’s mobile site. 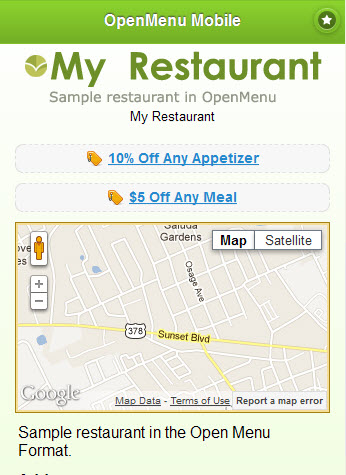 note: Deals and Coupons are unlimited in Premium+ and Platinum accounts. Free Accounts are limited to one (1) per month.